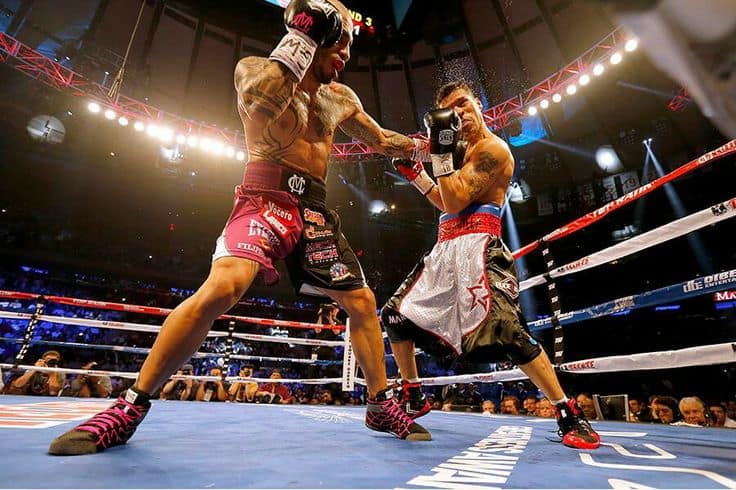 The left hook is a punch that many people have a misconception about when they first start boxing. I’ve often seen people come into the gym thinking that the left hook is more of a wild punch that involves a hard looping swing of the arm, rather than a punch that depends on proper technique and synchronization of other moving parts (e.g the hips, left foot, etc). In this article, we aim to provide as much help as possible in developing the proper technique for a left hook.

If you are part of a boxing club and are just starting to learn the basics of throwing the left hook, chances are these initial lessons are in front of a trainer, likely on the focus mitts. In this case, they will be there to immediately evaluate your progression with the technique. However, they may then send you off to a heavy bag to practice on your own. This is a great way to develop your skill level; however, it also leaves you susceptible to developing bad habits without knowing it.

Sure, bad habits will ultimately be caught by your trainer next time they are watching or you are on the mitts, but poor technique can lead to injury, especially on the heavy bag and when throwing a left hook. For this reason, we highly suggest that you use boxing gloves with solid wrist support, especially if using a heavy bag. Click here for more information about these boxing gloves.

We will describe the upper- and lower-body movements separately, and then describe the combination of the two together. For all these descriptions, we will be referring to a standard stance.

Now that you have learned the proper stance, where to have your gloves, how to throw a jab and a right, you have many of the tools you need to succeed. The stance remains the same, but the punching technique has a few more things to think about than a jab.

Beginning from a protective stance with your elbows protecting your sides, you will want to move your left fist up and across your body at head-level. When in the protective stance, chances are your elbow is quite bent. As you throw the punch, your elbow will begin to extend (i.e. your arm “opens up”). One of the first things to know is that you do not want your elbow to go past 90 degrees if possible, as you will be reaching at this point. A 90 degree angle also facilitates optimal punching power.

For the “up” motion, your elbow will rise out and up from your side, but your fist has yet to move across your body. Then, once your elbow is up, the elbow joint should be at 90 degrees. This allows for maximum power, as you will then swing through with your fist crossing your body. This last part is the “across” portion I mentioned before. One way to really drill the technique into your head is by thinking “if I miss with the fist, connect with the elbow”. Obviously don’t throw elbows at your opponent, but it may help you with remembering to follow through with the elbow for added power.

At this point, it may feel like a very choppy motion. Just go through the motion step by step to begin with, and then slowly try to connect the dots making it more fluid. Eventually, it should be one fluid motion.

There are a few key things to keep in mind when thinking about lower body mechanics during the left hook. If you’re comfortable with the right cross, you will understand that the hips can play a major role in generating punching power. This is the same thing for the left hook, but given you’re throwing from your front hand, the twisting movement will be much shorter.

Now if you think about throwing the left hook as described in the upper body movement section, and now introduce a slight hip twist, the fact that your left foot is still planted basically restricts the motion enough that you won’t generate much power. That’s why it’s extremely important to allow your left foot to twist inward. This isn’t the same as rolling your ankle! You still have the ball of your foot on the ground at all times, it just simply allows you freely twist your hips without any restriction. Even if it’s a short motion, it still makes a huge difference in punching power.

If this is still unclear, give it a go. You will soon piece together all the parts. One way people have described the need to turn your foot inwards is: “it allows you to put everything behind your punch”.

This can be a lot to think about, but piecing everything together is like learning to ride a bike. It can seem difficult at first, but once you get it, it will “click”, and you won’t lose it.

As this is extremely difficult to describe in text in a clear manner, the best advice I have is to try and time the upper body and lower body the same. What I mean is your upper- and lower-body movements will start at the same time. Your foot will be finished turning inwards just as you end the striking portion of your punch, then as you start to bring your hand back your foot will also begin to turn back to it’s normal stance.

All of this happens in the blink of an eye, but if you make sure to slow things down at the start and get someone to check up on your technique every now and then, you should be well on your way to packing some big time heat with your left hook.

You can find lots of videos on how to throw a left hook. Although this one doesn’t have a ton of views compared to the others, I think Freddy Roach really does a great job describing it in a simple and clear manner. That, and the fact that he is probably the best boxing trainer in the world, means that I can’t really argue with anything he has to say!